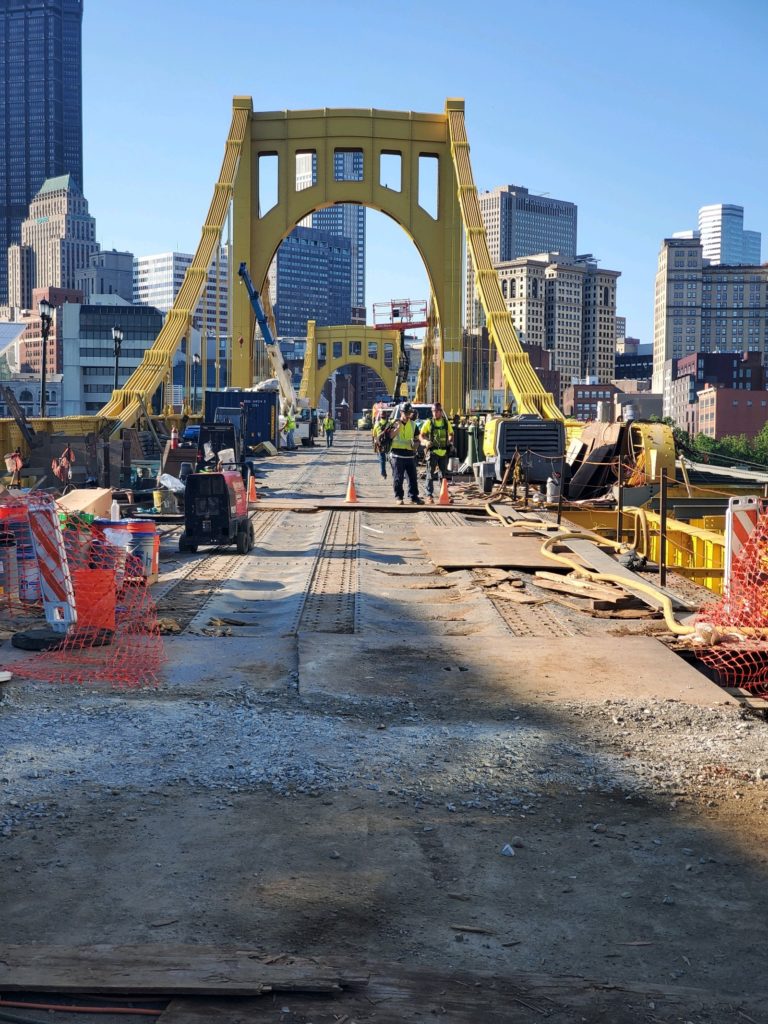 RNDT provides industrial radiographic testing services in both our laboratory and in the field at customer locations. We have traditional film based and digital computed radiographic testing services.  Our custom built mobile darkrooms are easily set up in less than 10 minutes. We have several exposure vaults that allow for very large parts to be examined. We have several X-ray cabinets for small parts such as electronic chips.  Also, we provide high volume processing of film with state-of-the-art ecologically friendly automatic processors. Our Level II and Level III radiographers are experienced in many different specialty techniques involving geometrically challenged parts.

Industrial radiography involves the use of penetrating X-ray or gamma radiation to examine parts and products for flaws that could be detrimental to their intended use. An X-ray machine or radioactive isotope is used as a source of radiation. Radiation is directed through a part onto a film or an electronic device (plate). When the film or plate is processed, a negative-like picture is obtained that shows the internal characteristics of a part. Possible imperfections show up as density changes in the film, in much the same way an x-ray can show broken bones. 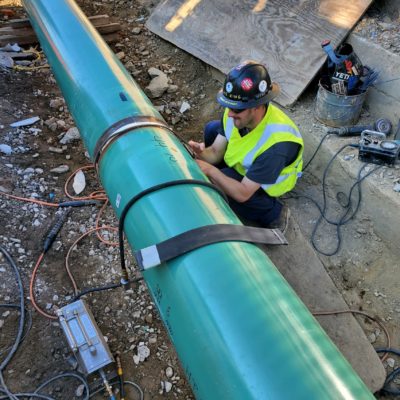 Radiography started in 1895 with the discovery of X-rays (later also called Röntgen rays after the man who first described their properties in detail), a type of electromagnetic radiation. Soon after the discovery of X-rays, radioactivity was discovered. By using radioactive sources such as radium, far higher photon energies could be obtained than those from normal X-ray machines. Soon these found various applications, with one of the earliest users being Loughborough University[1], from helping to fit shoes, more lasting medical uses and the examination of non-living objects. X-rays and gamma-rays were put to use very early, before the dangers of ionising radiation were discovered. After World War II new isotopes such as caesium-137, iridium-192 and cobalt-60 became available for industrial radiography, and the use of radium and radon decreased. 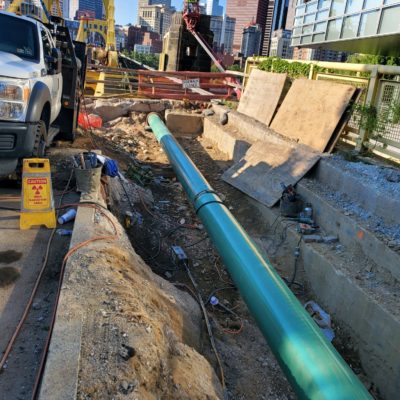 Gamma radiation sources, most commonly Iridium-192 and Cobalt-60, are used to inspect a variety of materials. The vast majority of industrial radiography concerns the testing and grading of welds on pressurized piping, pressure vessels, high-capacity storage containers, pipelines, castings, forgings, ceramics, electronic components, munitions or any component that defects can not be tolerated. Other tested materials include concrete (locating rebar or conduit), welder’s test coupons, machined parts, plate metal, or pipewall (locating anomalies due to corrosion or mechanical damage). Theoretically, industrial radiographers could radiograph any solid, flat material (walls, ceilings, floors, square or rectangular containers) or any hollow cylindrical or spherical object.

For purposes of inspection, including weld inspection, there exist several exposure arrangements.

First, there is the panoramic, one of the four single wall exposure/single wall view (SWE/SWV) arrangements. This exposure is created when the radiographer places the source of radiation at the center of a sphere, cone, or cylinder (including tanks, vessels, and piping). Depending upon client requirements, the radiographer would then place film cassettes on the outside of the surface to be examined. This exposure arrangement is ideal – when properly arranged and exposed, all portions of all exposed film will be of the same approximate density. It also has the advantage of taking less time than other arrangements since the source must only penetrate the total wall thickness (WT) once and must only travel the radius of the inspection item, not its full diameter. The major disadvantage of the panoramic is that it may be impractical to reach the center of the item (enclosed pipe) or the source may be too weak to perform in this arrangement (large vessels or tanks).

The second SWE/SWV arrangement is an interior placement of the source in an enclosed inspection item without having the source centered up. The source does not come in direct contact with the item, but is placed a distance away, depending on client requirements. The third is an exterior placement with similar characteristics. The fourth is reserved for flat objects, such as plate metal, and is also radiographed without the source coming in direct contact with the item. In each case, the radiographic film is located on the opposite side of the inspection item from the source. In all four cases, only one wall is exposed, and only one wall is viewed on the radiograph.

Of the other exposure arrangements, only the contact shot has the source located on the inspection item. This type of radiograph exposes both walls, but only resolves the image on the wall nearest the film. This exposure arrangement takes more time than a panoramic, as the source must penetrate the WT twice and travel the entire outside diameter of the pipe or vessel to reach the film on the opposite side. This is a double wall exposure/single wall view DWE/SWV arrangement. Another is the superimposure (wherein the source is placed on one side of the item, not in direct contact with it, with the film on the opposite side). This arrangement is usually reserved for very small diameter piping or parts. The last DWE/SWV exposure arrangement is the elliptical, in which the source is offset from the plane of the inspection item (usually a weld in pipe) and the elliptical image of the weld furthest from the source is cast onto the film.

The beam of radiation must be directed to the middle of the section under examination and must be normal to the material surface at that point, except in special techniques where known defects are best revealed by a different alignment of the beam. The length of weld under examination for each exposure shall be such that the thickness of the material at the diagnostic extremities, measured in the direction of the incident beam, does not exceed the actual thickness at that point by more than 6%. The specimen to be inspected is placed between the source of radiation and the detecting device, usually the film in a light tight holder or cassette, and the radiation is allowed to penetrate the part for the required length of time to be adequately recorded.

Before commencing an industrial radiographic examination, it is always advisable to examine the component with one’s own eyes, to eliminate any possible external defects. If the surface of a weld is too irregular, it may be desirable to grind it to obtain a smooth finish, but this is likely to be limited to those cases in which the surface irregularities (which will be visible on the radiograph) may make detecting internal defects difficult.

A high energy X-ray machine can be used. It is often important to use a high accelerating voltage to provide the electrons with a very high energy. This is because in a braking radiation source the maximum photon energy is determined by the energy of the charged particles. A recent development is the betatron, which is a device similar to a cyclotron that acts as a very intense photon source.

These have the advantage that they do not need a supply of electrical power to function, but they do have the disadvantage that they can not be turned off. Also it is difficult using radioactivity to create a small and compact source that offers the photon flux possible with a normal sealed X-ray tube. One of the leading makers of radiographic equipment is the Source Production & Equipment Co., Inc.

It might be possible to use Cs-137 as a photon source for radiography but this isotope is always diluted with inactive cesium isotopes. This makes it difficult to get a physically small source, and a large volume of the source makes it impossible to capture fine details in a radiographic examination.

Both cobalt-60 and caesium-137 have only a few gamma energies, which makes them close to monochromatic. The photon energy of cobalt-60 is higher than that of caesium-137, which allows cobalt sources to be used to examine thicker sections of metals than those that could be examined with Cs-137. Iridium-192 has a lower photon energy than cobalt-60 and its gamma spectrum is complex (many lines of very different energies), but this can be an advantage as this can give better contrast for the final photographs.

It has been known for many years that an inactive iridium or cobalt metal object can be machined to size. In the case of cobalt it is common to alloy it with nickel to improve the mechanical properties. In the case of iridium a thin wire or rod could be used. These precursor materials can then be placed in stainless steel containers that have been leak tested before being converted into radioactive sources. These objects can be processed by neutron activation to form gamma emitting radioisotopes. The stainless steel has only a small ability to be activated and the small activity due to 55Fe and 63Ni are unlikely to pose a problem in the final application because these isotopes are beta emitters, which have very weak gamma emission. The 59Fe which might form has a short half life, so by allowing a cobalt source to stand for a year much of this isotope will decay away.

The source is often a very small object, which must be transported to the work site in a shielded container. It is normal to place the film in industrial radiography, clear the area where the work is to be done, add shielding (collimators) to reduce the size of the controlled area before exposing the radioactive source. A series of different designs have been developed for radiographic “cameras”. Rather than the “camera” being a device that accepts photons to record a picture, the “camera” in industrial radiography is the radioactive photon source.

One group of designs use a radioactive source, which connects to a drive cable contained shielded exposure device. In one design of equipment the source is stored in a block of lead or depleted uranium shielding that has a S shaped tube-like hole through the block. In the safe position the source is in the centre of the block and is attached to a metal wire that extends in both directions, to use the source a guide tube is attached to one side of the device while a drive cable is attached to the other end of the short cable. Using a hand operated winch the source is then pushed out of the shield and along the source guide tube to the tip of the tube to expose the film, then cranked back into its fully-shielded position.